To see St. William’s Fall 2022 Newsletter, you can also download a pdf.

A Thank You. Jim Dillon

Dawn Timm is leaving the Board of Directors after many years of service to St. William’s on Long Point, not only as a director but as a house cleaner at the opening up volunteer days, as a fund raiser and event organizer, and as a go-to, fill-in-the-gaps person on a number of occasions. Dawn has allowed herself to be put in an officer’s position, reluctantly, a number of times. Some of those times have been difficult and Dawn has been instrumental in pulling the organization through some bad times. Now she leaves the organization in good shape and moving forward.

The members of the Board, past and present, appreciate your service, Dawn, as well as everyone who enjoys St. William’s on Long Point.

We are sad to say that Matt Cornelia died September 25, 2022. At 104 years old he was still a happy friend. He was a long-time summer resident and loved Raquette Lake and all the folks here.

Matt volunteered many years at the Raquette Lake Library, including being one of the “cashiers” at age 101! He was one of the original Board members and later Treasurer for St. William’s Long Point beginning in 1993. He loved working at the Chicken Bar-B-Que, selling tickets and always welcoming to all. When one of his daughters, Maureen, got married at St. William’s on Long Point, the bride and groom left in a sea plane to head to their reception. Matt stood and waved along with the rest of the crowd, a big smile on his face. As his daughter, Kathleen, said, “His indomitable spirit remains an inspiration to us all.”

Matt and his family have asked that donations in his memory be sent to St. William’s on Long Point. We thank him and will miss him, as we celebrate a great life.

We are pleased to welcome two new members to our Board of Directors.

Jim Kistler, who has a summer home in Sucker Brook Bay, has been a volunteer for three years along with his wife Donna. In his spare time, he likes to do woodworking, small boat building, remodeling, and choral singing.

Tina Timm, who grew up here in Raquette Lake, works at Timm Associates and is the owner of Dragonfly Cottage Vintage Marketplace in Old Forge. In her spare time, she makes spectacular doll houses.

On Thursday, July 21st, I, along with two guests, attended the SWLP concert at the RL school. The gym was packed with enthusiastic concert goers. We were treated to another fantastic musical event. People were singing along and dancing in the aisles. As usual, there was a pie raffle to support SWLP. Lady luck was on our side as we were one of two winners. The pie was DELICIOUS!

SWLP sponsors a concert six Thursday evenings during the summer. SWLP is listed on the National Register of Historic Places. A visit to SWLP is a must on anyone’s bucket list. And if you are lucky enough to be in the area on a Thursday, attend the concert. We had a GREAT time!

When I volunteer at Saint William’s, I am pulled back in time. The Franciscan Friars came to Saint William’s on Long Point as their summer retreat when I was young. They taught catechism at the village and became friends with all the kids. They were barely college age kids themselves but those black robes with hoods and the white “rope” knotted belts were impressive (literally) so they seemed so much older. The Friars taught many of us how to sail on their lightning sailboat — and tennis at our camp and cards and stories.

While, not so historic a time as 1890s, much of the connection to SWLP for so many of us is personal as it is with me. I am so grateful that our non-profit will keep it preserved.

We would like to thank Autumn Blanchard and Eric Christensen for the wonderful jobs they did this summer as caretaker and innkeeper. They did a great job of keeping the site clean and organized, helping people when needed, answering questions, and giving tours when folks stopped by the church. Eric also worked with the performers setting up sound systems to make for wonderful concert sounds.

Everyone loved them and we were delighted to have them on staff. Unfortunately, they will not be back next year, due to other jobs, so we are now looking for a new caretaker & innkeeper. Please go to our website for a full job description. Many thanks for Eric and Autumn for all they did to make this a wonderful season at St. William’s on Long Point.

Helen Roe sends her greetings and best wishes to all! She is now 96 years young and has great memories of St. William’s and all the good times there with everyone

We continue to make improvements on the buildings and the site at Long Point. This year we had four decayed trees brought down due to proximity to the buildings, especially the Boat House. Levi Lumber Company cut and blocked the trees, after which the hardy volunteers split and stacked the wood. Thanks to the volunteers for all of their hard work!

The second project was to put a new roof on the Bunk House, done by Gold Star Roofing. No more leaks and a job well done!

The most exciting project was having the trim on the church painted green. This is so important as it is now historically correct once again! The excellent painting job was done by Production Painting and Services from Rome, NY. We are very pleased with how the church now looks. 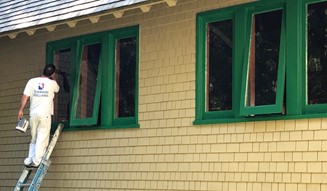 I have been on the Board of St. William’s on Long Point for over 25 years. Most of that time the Board was very challenged to keep St. William’s afloat balancing our income and expenses to pay for necessary capital expenses together with day by day bills. We are blessed in the happenings of the past few years.

Rental income has dramatically increased as have our donations. The six weeks of Thursday summer programs have brought many new visitors to our shore to learn and appreciate what a special place we enjoy.

It has been my pleasure to work in late spring and summer one day a week washing windows, mowing lawns, growing flowers and whatever this sacred site needs. The investment of my time and effort pays off in the calm, serenity, and peace that St. William’s offers. I hope you will consider supporting this historic property on beautiful Raquette Lake.

Helen Roe sends her greetings and best wishes to all! She is now 96 years young and has great memories of St. William’s and all the good times there with everyone.

Did you know that during Durant Days St. William’s held an Ice Cream Social on the Village Green? Raquette Lake Supply donated chocolate, mint, and vanilla ice cream for the congenial crowd that gathered to have a sweet treat. Everyone stayed on, and the crowd even got larger for the excellent Wide Variety concert that followed the social. 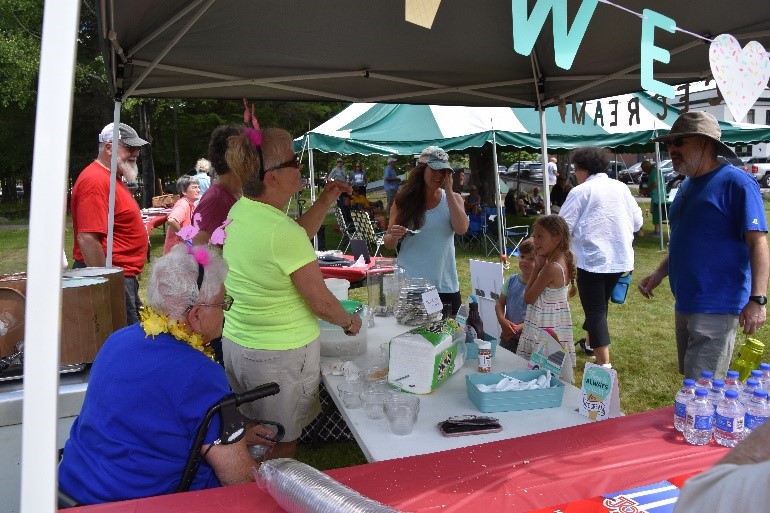 In addition to the concert there was a silent auction featuring a quilt made by Linda Norris, portable wicker chairs, placemats, a framed Adirondack print, a DIY carving project, among other things. Our caretakers worked with a local vendor to create slate hot mats, tins, magnets, and coasters with the sketch of St. William’s.

The event and generosity of those in attendance raised over $750 to support St. William’s. 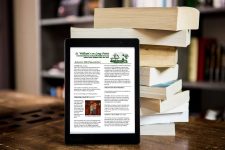 Please use our online form to add your name to our emailing list. We don’t send emails out often, but we will use it to announce Volunteer Days and the concert series performers and dates.

You and I have been supporters of St. William’s because of the significant contribution the church has made to our community here on Raquette Lake. The purpose of writing this letter is to raise funds towards the improvements and repairs that are needed to preserve a 132-year-old historic property built by William West Durant here in the Adirondacks. Any amount you offer will be put to good use.

Your financial gift will assist our organization to continue to maintain this piece of history for everyone to enjoy and admire. It will also support opportunities for musicians and artists by providing a venue for performances.

Please visit our PayPal donation portal to make a donation. To learn more about St. William’s, you can also visit our website. Thank you in advance for your kind, tax-deductible donation, and support.

If you would prefer, you can mail a contribution to

St. William’s is governed by a volunteer board which meets on a quarterly basis. Our current board includes:

Please note St. William’s is not affiliated with or under the jurisdiction of the Roman Catholic Diocese of Ogdensburg or the Conventual Franciscan Friars.

St. William’s is a not-for-profit, non-denominational lakeside retreat and cultural center, 501c3 organization and we are proud of our mission to restore and maintain the historic church and the buildings on the site.